THE PRACTICE OF TRADITIONAL WEAPONS 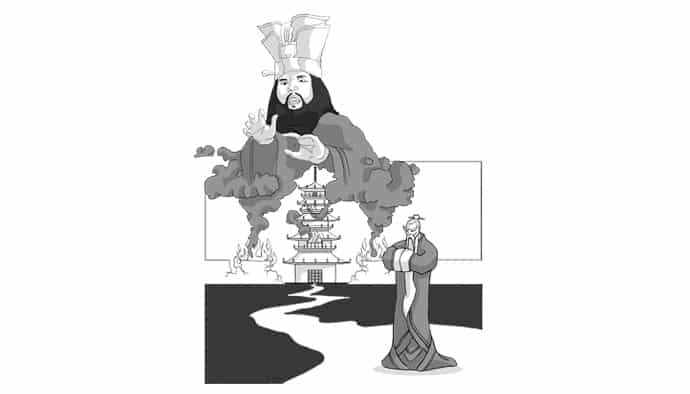 The history of weapons and their importance in modern practice

It was with the coming of Bodhidharma that Kung Fu made its appearance in monastic life in China. From his teachings, the monks created a series of martial arts which many current schools can trace their lineages. Martial training included, among other things, unarmed forms and weapon handling; the first of these to be used was the stick, even before the practice of martial arts, mainly by wandering monks. This object aligned perfectly with the Buddhist thought that prevents causing the death of a living being and for a long time was the only one practiced by monks.
One of the earliest writings regarding the Shaolin Temple’s participation in a battle was in the 7th century during an expedition led by Li Shi Min (later Tang Taizhong) who was tasked with securing an area near the temple. Trapped by bandits, the prince was rescued by thirteen monks armed with sticks.

In the 14th century, in the Yuan Dynasty made the appearance of the term “18 weapons of Shaolin” in a song. For the first time, we have evidence of a change in the temple’s arsenal. It is therefore almost 800 years after the foundation and 600 years after the first military accounts of the monks that the repertoire of weapons would have expanded to include blades.
It was during the Ming dynasty that we find several texts relating to the presence of monks during battles. At this time, monks were an important part of any troop surveys. It was also at this time that they would have put more emphasis on their practices with bare hands to facilitate practices with other corps of weapons.

The schools resulting from the Shaolin temple have preserved, in general, 18 weapons of which a dozen appear in several styles given their cultural or historical importance. For example, the long-handled saber (Kwan Dao), the spear (Jie), the sword (Jian), the saber (Dao) and the staff (Bang). Then there are regional or iconic weapons in style, for example butterfly knives for Wing Chun or deer horn knives for the Hong Gar.
Formerly, carrying a weapon was proof of status. The one who carried a sword exposed to the world that he was a warrior ready to defend himself. Which was essential at a time when there was no police. The dangers were many. With modernization, law enforcement, the emergence of firearms and political stability, martial defense means for personal defense have largely been rendered obsolete. We no longer walk with swords on our belts. Wars are no longer fought with the bow and spear. So why continue their teachings? Why would anyone want to practice gun handling these days?

First, they allow muscular exercise, the use of force with an object, to project this energy out of the body and to develop flexibility and physical skill for the artistic aspect of the martial art. It is for these reasons that we find weapons of different weights.

Second, the practice requires great concentration and coordination of the eye and hand to avoid injury to yourself and others and not to destroy the training site. It is intimidating for many to have in their hands an object that can cause harm to others and it is through this learning that the practitioner will be able to progress on the Way. At the temple there was a term: “Qiang Za Yi Tiao Xian, Gun Da Yi Da Pian” which can be summed up as: the practice of the stick allows us to better perceive space.

Third, for any school that claims to be traditional, it is essential to keep the style without variation. As mentioned above, the practice of weapons has historical significance, so it is the duty of these schools to maintain the forms in full so that subsequent generations can benefit from them.
It is therefore essential to maintain the teaching of weapons especially in these modern times when the past is slowly disappearing. Just as Confucianism teaches us, to know your way you have to know where you are going, but especially where you come from.